This series is an exceptionally well-written, addictive, and brutal epic fantasy set in an imaginary world based on medieval England/ Europe. It is less of a fantasy and more of a political thriller – some say that it is loosely based on the War of the Roses in England in the years 1455-1485.

The epic has also been converted into a HBO serial. Some video games, based on the series have also become very popular.

Here are the images of the covers of these books: 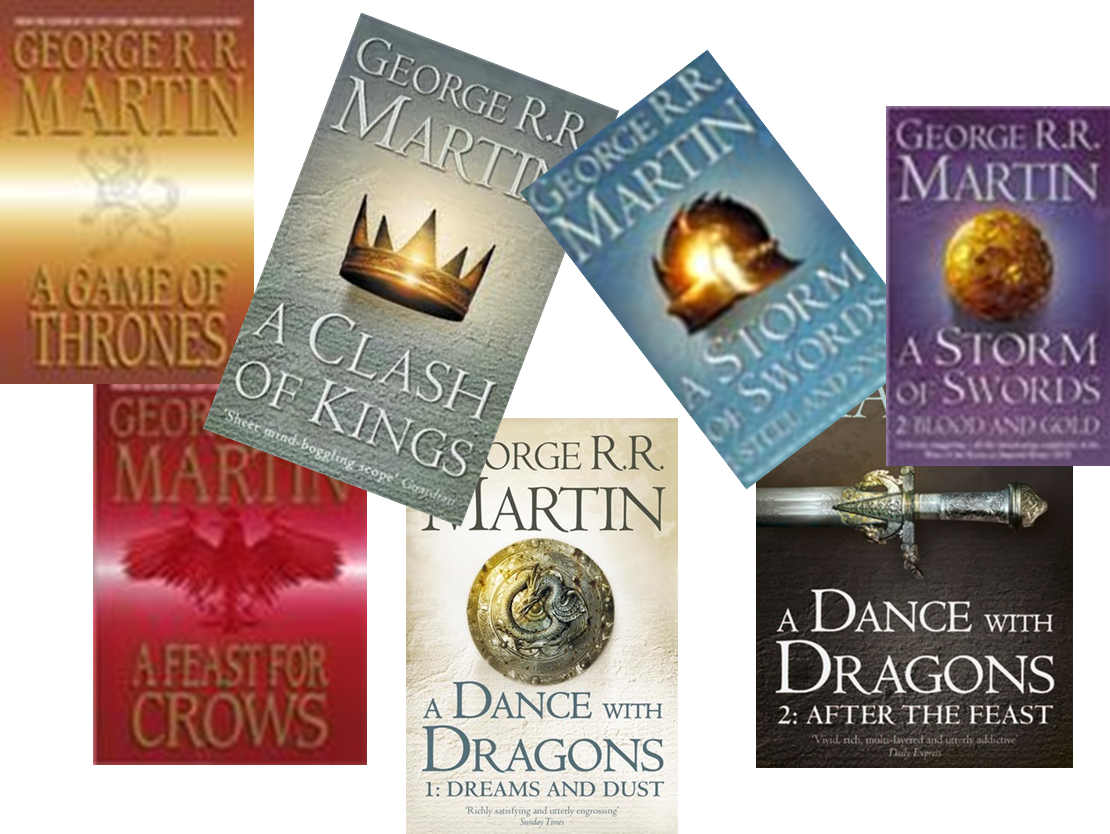 The story is set in a fictional world, and most action takes place in two continents – Westros and Essos.

The back story (the background for the series): Seven Kingdoms in Westros have been united and ruled for several generations by the Targeryen dynasty (helped by fire-breathing dragons) –  the old kings of the seven kingdoms continue as vassals. Around fourteen years before the start of the series, the dynasty, ruled by a mad king (the dragons have all disappeared) is overthrown by the ‘usurper’ Robert Baratheon. King Robert maintains peace for a few years.

As the series starts, King Robert dies under mysterious circumstances. That starts mutiple rebellions. There are many claimants to the throne of the combined Seven Kingdoms – the brothers and the son of the dead king. Some of the vassals (descendents of earlier kings of the Seven Kingdoms) break away  from the combined entity and declare themselves as kings of their part of Westros. There are also members of the Targeryen dynasty (now living in exile in Essos) who start their journey to reclaim the throne. The result is a heady mix of chaos, treachery, brutality, intrigue, betrayal, honour, battles, duels, torture, magic, and constant political manoeuver. There is also a severe seven-year winter that is about to descend on Westros.

Broadly, the story is played out in three places:

The series has reached volume 5 (in 7 paperback books). The story has spread itself in multiple directions.  There are two more volumes planned by the author. Let us hope he starts tying up some loose ends.

In the Seven Kingdoms on the Westros continent, there is a King. Next to the King there are vassals (lords) who rule large parts of the Seven Kingdoms in the king’s name. These lords have other vassals under them (called bannermen). The titles are passed hereditarily with complex and conflicting rules (each conflicting rule has some precedence) which often lead to disputes (like – is the next in line the eldest son? or daughter? or the brother?). There are knights (addressed as ‘Ser’) who protect the king and each lord. The kingdom is run by a king’s council consisting of the Hand (like a prime minster), the Master of Coin (finance minister), the Master of Whispers (spy chief), etc.

In the northern part of Westros (separated by the Wall from the Seven Kingdoms), there are free folks who have a king whom they have sort of elected.

In the other continent of Essos, there are Free Cities, often run by elected councils or influential families.

It is a harsh world with seasons spread over multiple years. People dread the coming of the winter, which is expected to last for seven years. The terrain is also harsh. There are thinly spread villages, racked by poverty and hunger and often drawn into wars between the lords.

Apart from the kings, lords and knights, there are maesters (healers and teachers), priests (septas and septons), jesters, singers, and so on. Some fighters become sellswords (like mercenaries) and sometimes group together to form a company of sellswords. The king and lords implement some kind of ‘gain share’ with their soldiers by allowing the soldiers to pillage, loot and rape the cities and villages they vanquish. Ordinary people are called smallfolk, and they are miserable irrespective of who rules them. Slavery of some form or the other is rampant.

The world is run by people in the age group of 15- 40 years. There is no place older people. Most folks die before they reach old age. It is also a male dominated world, though there are a few women who are powerful and a few female knights (good as well as not so good). The king, and most lords and knights have ‘bastard’ children, in addition to their legitimate offspring. The word ‘bastard’ is often used as a title/ prefix for such folks.

Children/ siblings of non-cooperating lords are often kept as wards (or potential sons-in-law or daughters-in-law) by the king or the more powerful lords – while they are actually hostages to ensure good behaviour of their parent/sibling. If one party violates some truce, the other party dismembers the hostages or sends them back in trebuchets (or dismembers the hostages and then sends their parts in trebuchets).

Justice is harsh. To be sentenced you just need to be accused by someone powerful, with the accusation seconded by one or two more influential people. Any crime can be converted to ‘treason’ and that invites beheading in public. You sometimes get an option to trial by combat, where you (or your fighting champion) can fight with the accuser (or his/her champion)  – if your side wins, then you are “not guilty”.

Violence is always round the corner. Rape, beheading, torture, flaying, and burning is a daily occurence. Post defeat or punishment, the heads of the dead are stuck on spikes and put up for display in a prominent place (as a lesson for others).

There are multiple religions – the newer ones are well-organized, the older ones are personal equations with a God. Religion does play a significant role in the series.

Like in all fantasy tales, there is magic and there are magical creatures like dragons and direwolves. However, the role of magic is not central to the plot.

I have read quite a few fantasy novels and series. However, this one is different from the others in many ways, such as:

I have enjoyed the series till now. Here are a few things that I find negative:

Interesting Quotes from the Series

“Why is it that when one man builds a wall, the next man immediately needs to know what’s on the other side?”

-A Game of Thrones

-A Game of Thrones

“There are no men like me. There’s only me”

– A Clash of Kings

“Love’s not always wise, I’ve learned. It can lead us to great folly, but we follow our hearts… wherever they take us.”

– A Storm of Swords

“All men must die, Jon Snow. But first we’ll live.”

– A Storm of Swords

“My old grandmother always used to say, Summer friends will melt away like summer snows, but winter friends are friends forever.”

– A Feast for Crows

“A reader lives a thousand lives before he dies, the man who never reads lives one.”

– A Dance with Dragons

“It is not the foes who curse you to your face that you must fear, but those who smile when you are looking and sharpen their knives when you turn your back.”

– A Dance with Dragons

“You know nothing, Jon Snow”

Over many volumes and the most repeated quote

Here is the full list of the books and the video series.

If you have not yet read any of the books in the series, go for the first one (A Game of Thrones – right away! You will hooked on to it.

And finally, here is a video trailer from the HBO series:

If the video does not load use the url: http://www.youtube.com/watch?v=5PxLidxnAE8

Your comments are welcome!

I'm Rajesh Naik, and this is my personal website If you are interested in contacting me, I am also available on LinkedIn and I will be glad to accept your invite. View all posts by Rajesh Naik